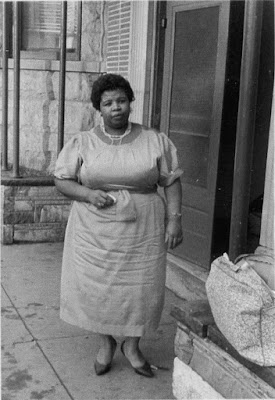 
Tiny Topsy was one of those marvellous big-voiced women of the mid to late 50s, in the vocal style of Big Maybelle, LaVern Baker and Big Mama Thornton, who possessed a set of lungs to match her 250 pound physique. She was born May 22, 1930 in Chicago and began performing with Al Smith’s band in Chicago in 1945. This group split in 1952, with Smith becoming an in-house band leader for the likes of Chance, Parrot and Vee-Jay, but without Tiny's involvement. 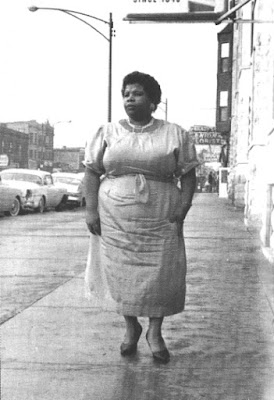 Tiny's first recording session for Federal Records was held in Cincinnati on July 9, 1957 and resulted in the bouncy "Aw! Shucks Baby", with a great tenor solo by Ray Felder. Backing group were The Charms (with no mention on the label). It was a screamer equal of LaVern Baker. The flip was a cover of “Miss You So”, a Top 10 R&B hit for Lillian Offitt. A third track from this session, "A Woman's Intuition", remained unissued until 1988. 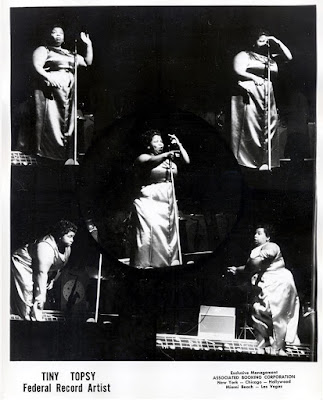 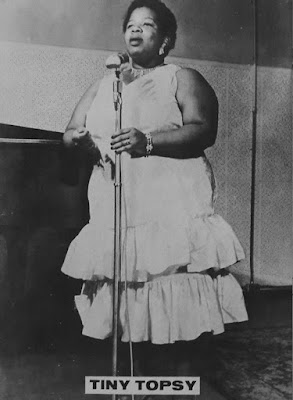 Tiny Topsy certainly was a trendsetter, because her next single (and her last one for Federal) was the original of what has become a classic : “Just A Little Bit”, paired with “Everybody Needs Some Loving”. Rosco Gordon had a # 2 R&B hit with his version of “Just A Little Bit” in 1960 and the song has been covered by countless people, including Jerry Lee Lewis “Southern Roots” album. After leaving Federal Tiny Topsy had only one further single released, "Working On Me Baby", coupled with “How You Changed” (Argo 5383). An alternate take of “Aw! Shucks Baby” with “Everybody Needs Some Loving “on the flipside was released by King Records in 1963.

Although Tiny Topsy never became a big name star and frequent occupier of the charts, her records were always great  She died on August 16, 1964 at the very young age of 34 of brain hemorrhage in Chicago.

Ring Around My Finger

Everybody Needs Some Loving

How You Changed (aka After Marriage Blues)

Working On Me Baby