The Impressions were the crucial link in the evolution of black popular music from the ebullient sexuality of Fifties Rhythm & Blues and Doo-Wop's raw choral passion to me sophisticated grooves, celebratory vocal intensity and poetic dignity of classic Sixties Soul. They pioneered and epitomized the sound of Chicago Soul, a marriage of Gospel and Pop influences with a timely conscience.

They came together in 1957 as a union between Sam Gooden and brothers Richard and Arthur Brooks (members of a vocal group called the Roosters), and songwriter/producers Jerry Butler and Curtis Mayfield (of the Northern Jubilee Gospel Singers), who were childhood friends living on the west side of Chicago. Born in Sunflower, Mississippi, in 1939, Butler was brought to Chicago by his parents three years later as they sought wartime jobs as part of the Great Migration.

Beside Jerry Butler and Curtis Mayfield this gospel group consisted of three of Mayfield’s cousins Sam, Tommy and Charles Hawkins. They were traveling the gospel circuit and performing in the Traveling Souls Spiritualist Church, of which Mayfield’s grandmother was a pastor. To help out with the family finances, both boys sang with secular groups on the side, Jerry with The Quails and Curtis as part of The Alphatones. Sam Gooden was in a gospel choir, The Southland Jubilee Singers, in his home town, Chattanooga, Tennessee. Fred Cash, who was several years younger, joined a few years later. They started a secular group, Four Roosters and a Chick, with Arthur Brooks, Emanuel Thomas and his sister Catherine; after she left, Arthur's brother Richard stepped in and the quintet became The Roosters. Thomas and the younger Cash dropped out when the other members of the Roosters moved to Chicago. Fred Cash had to stay home because his mother thought he was too young. Upon their arrival in the Windy City Richard, Arthur and Sam enrolled at the Washburn High School.

The local Chicago promotions man Eddie Thomas became the group manager. During 1957 Thomas came up with an unusual gig for the teenagers: a downtown fashion show. Performing their usual set of rhythm and blues doo wop songs, the group also did an original with music by the Brooks brothers and lyrics by Butler titled “For Your Precious Love.” It caught the attention of one Mrs. Violet “Vi” Muzinski, who owned Bandera Records along with her son Bernie Harville Jr. The Impressions signed with Bandera in April 1958. Vi Muszynski arranged an audition with Calvin Carter of Vee-Jay Records. A more elaborate version of the Vee-Jay encounter was described by Curtis Mayfield in an interview. It seems the group was standing knee-deep in snow at the door of Chess Records, but the secretary, seeing them through the window, refused to let them in. Rather than freeze, they went across the street to Vee-Jay Records, entered, and were greeted by a great dane that held them at bay until Carter came down. They auditioned with “For Your Precious Love” right in the hallway and wound up recording for the label a few days later. (It was Carter who changed the name of the Roosters to the Impressions).

Vi Muszynski worked with the group and leased their finished recordings to Vee-Jay. “For Your Precious Love” was released on Vee-Jay in May 1958. It was an unusual all-verse ballad that never repeated the title, had no hook, and had a quiet gospel tone. With Butler’s baritone lead, it is, arguably, the first recognizable soul-styled ballad. There were immediate complications: before many copies of the Impressions’ single could be pressed on Vee-Jay, Ewart Abner, the label’s general manager, arranged for “Precious Love" to wind up on a Vee-Jay distributed label called Falcon, which some say Ewart owned a piece of. To further complicate matters, Falcon then had to change its name or face an infringement suit, so it became Abner Records, with the exact same logo and artwork (a picture, not surprisingly, of a falcon). The song was now on three labels, each of which read “Jerry Butler and the Impressions” (what caused friction within the group) since Vee-Jay recognized his distinctive style and wanted him out front. By July 28th “For Your Precious Love” was at number 11 Pop and number three R&B. Its flip side, the more traditional doo wop rocker “Sweet Was The Wine,” became a street-corner vocal group favorite over the years. 900,000 copies were sold. Butler was 19 when it was released, Mayfield 17. 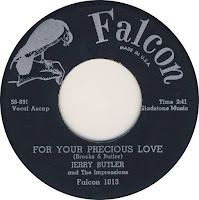 In September, their second single, “Come Back My Love,” with a similarity to “Precious Love,” came out and went to #28 R&B but never crossed into Pop. Because Vee-Jay's designation of Butler as the credited leader created a problem for the group's other members the record was issued as “The Impressions featuring Jerry Butler.” By the fall of 1958, Vee-Jay decided to separate Jerry Butler from the Impressions. With no money to fight a legal battle Vi Muszynski had scant chance of winning, Vi found herself with a leaderless group. After Jerry was away from the group, Bandera released only one disc, “Listen” b/w “Shorty's Got To Go.” Bandera released the Impressions from their contract in September 1959. Three remaining Ewart Abner singles under the name The Impressions went nowhere, including “At The County Fair,” the first recording with a Curtis Mayfield lead.

Meanwhile, Fred Cash of Chattanooga, a Rooster before that group moved north, took Jerry’s place in the Impressions. Curtis Mayfield, now clearly the lead voice and writer, took the quintet to New York and established a record deal with ABC-Paramount in 1960. Their first ABC single established them as distinct from other vocal groups, thanks to Curtis’ unique, fragile-sounding falsetto. “Gypsy Woman” reached number 20 Pop while rising to number two R&B. A few more singles were issued, but none with the impact of “Gypsy,” so in February 1963, Curtis, Sam, and Fred opted to return to Chicago while the Brooks brothers chose to stay in New York. Mayfield, Gooden and Cash decided to move forward as a trio. 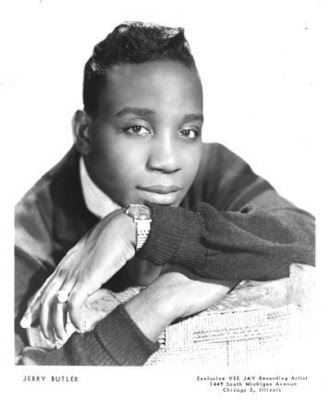 For Your Precious Love

Sweet Was The Wine

Come Back My Love

Listen
Shorty’s Got To Go

The Gift Of Love

At The County Fair

Senorita I Love You

Say That You Love Me

As Long As You Love Me

I'm The One Who Loves You

I Need Your Love

Don’t Drive Me Away

Don’t Drive Me Away (demo)

For Your Precious Love (demo)

I Know My Baby Loves Me

Shorty’s Got To Go (demo)

Sweet Was The Wine (demo)

Sweet Was The Wine (demo, with percussion)

You Are The Only One (demo)