The original Continentals were formed in the winter of 1955, when Buddy Payne, Herman Montgomery, James Gripper and James Vincent Cooper asked Danny Hicks to become a member of the Condors. Danny was quoted to say some years later: 'the most interesting factor about joining the Condors I found to be was that all of the members of the group were musicians. Buddy, Herman and Gripper were members of Wynn Center’s renowned marching band and Vinny was an accomplished singer. Everybody knew about his abilities. In addition to which, all of the guys sang in the Glee Club, at their respective high schools'. Herman was the only member of the group that did not go to Boy’s High; he was a student at Brooklyn Tech. Soon after Danny joined the group, they decided to change the name because they felt the name 'The Condors' was a little too similar to the names of other local groups, and they did not want to be mistaken for some other group; they wanted to develop and present themselves in a more unique manner. So, one night after practice, they spent some time wrestling with the problem of what the new name of the group would be. They finally settled on ‘The Continentals’, after a very popular show of the time which presented this suave, free-spirited, independent, playboy type who was very much the ladies man. He was well-dressed, accomplished, handsome and smooth-as-silk with the ladies. And the ladies were crazy about ‘The Continental’ TV show. Thus ‘The Continentals’ were born and they went to work immediately.


They formulated a ten song repertoire made up of two original songs (“Dear Lord” and “Fine Fine Frame”) and eight ‘cover songs’ (material originally done and recorded by others) for which they became well known - because of their ability to 'do the songs better than the artists who had originally recorded the tunes. Vinny was the musical director, Gripper was the choreographer (and the best dancer); Buddy, Herman and Danny handled the lead and background vocals.


It wasn’t long before they began entering local talent shows and singing at local functions like parties, picnics and as ‘after the game’ entertainment. At one appearance, formerly Girls High School, in Brooklyn, they were so well received that they literally needed the police to help them get out of the building after the show. It was that show that set the tone for their subsequent popularity in New York. Then they set out to find a record deal. But before they were able to find a record deal, Buddy Payne left the group and joined the U.S. Marines. At that point, John “Peanut” Jones joined and became an important part of the group.


Finding a good record deal has never been easy; and, in 1956 finding a record company that would listen to you was even more hectic than it is now. In those days, an aspiring singer or group/band had to do ‘cold auditions’; which consisted of performing the songs a cappella (without the benefit of musical accompaniment), in an office or a dingy club or perhaps an auditorium. Needless to say, they became good at singing without music. So good in fact, that they were signed to a recording contract after their first audition. The problem was that it turned out to be a very bad deal for the group and they were relegated to second priority with the label and were seldom promoted by the label’s owners. But despite the lack of exposure by the record company, they continued to prepare themselves for future stardom.


The Continentals recorded for the Whirlin’ Disc Record label. The recordings were: 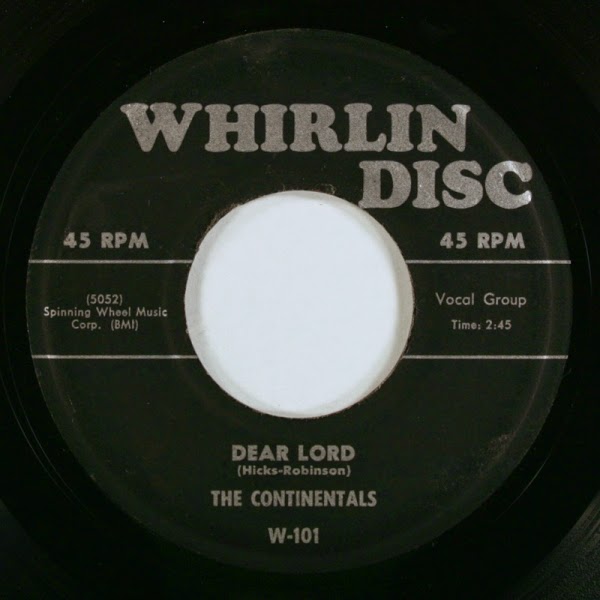 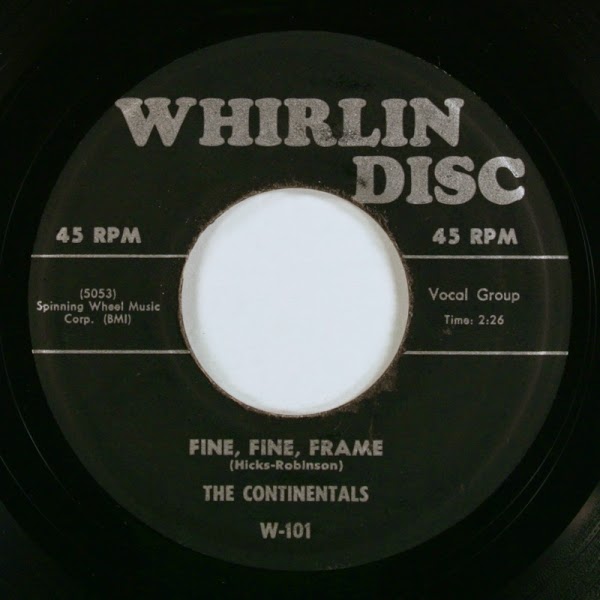 Their music became ever more advanced as they continued to expand their ever-growing repertoire. They became so accustomed to each other and so well rehearsed that they did not need notes to help them remember the names of the songs in that repertoire - they simply called out a number. They gave each song title a number and remembered their individual roles in each song by its number. For example,”'Dear Lord” was #1 and “Fine Fine Frame” was #2. So when someone said “#25!” they knew that meant they were going to sing “Why Do You Have To Go?” and so on. By the end of 1956 their song list had almost reached 50 well rehearsed songs. When asked why they practice so much, Vinny remarked, “Because practice makes perfect. And that's what we want to be. Perfect.”


Vinny Cooper, bass singer/bassist, was something of a musical genius. While still in high school, he was a member of New York's prestigious All City Chorus and a scholarship student at world famous Julliard School of Music. So, in addition to his classical background, Vinny loved modern jazz, blues and doo-wop music. Vinny was a renaissance man, well ahead of his time. He was most responsible for the group's innovative approach to music; which eventually led them to the world famous Apollo Theater in Harlem.


The Continentals influenced many groups of their generation and beyond, witnessed by comments from several ‘rival’ groups members. Without name dropping, one famous singer/song-writer said upon meeting Danny Hicks, and realizing that Danny was a former member of The Continentals, “Gee I always wondered what ever happened to you guys. I heard y’all at a theater in Brooklyn when I was in New York visiting some relatives. My cousin hipped me to y’all and we went to see the next show. Boy! We were blown away. I had never heard such tight harmony; and your vocals were just great. But then you guys seemed to have disappeared. What happened?” Danny only said “It’s a long and familiar story, man. Too painful to talk about.” Another member of the famous R&B group said “There are a lot of groups out today (in the year of 2000) who owe their successful harmonies to you guys. But they don't know it. Before the Continentals, nobody ran the scales; no group had a baritone who could ad-lib; you guys had a bass singer who could sing lead in three octaves and three main lead singers (Buddy, Herman and Danny - and later Peanut) who had different styles; you guys even used octave harmony and that was unheard of back then. I know things didn't work out, but y'all have nothing to feel bad about. We owe you a debt of gratitude for the work you guys left behind”. And so it goes.


One by one the original members left the group and they finally, sadly disbanded in 1958. James Gripper joined the U.S. Air Force before Willie Keels joined the group. But, in 1958, Vinny Cooper suddenly passed away. The guys were devastated. And although they tried valiantly to hold things together, they called it quits at the end of the year. Herman and Danny joined other groups; Peanut joined the U.S. Army and Willie seemed to vanish from the face of the earth.